Vacant, derelict structures were an eye sore for over ten years at a critical intersection of historic DeKalb Street. 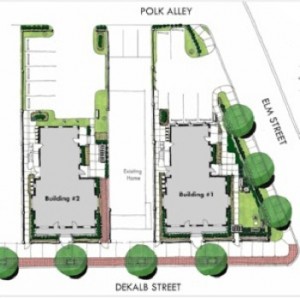 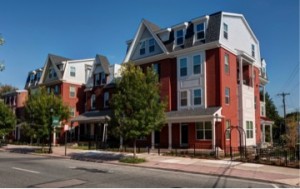 Six stacked townhomes are disguised to look like a single mansion 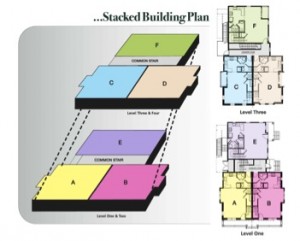 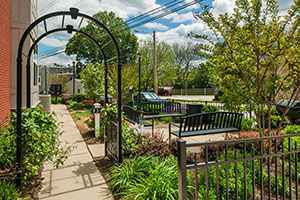 A pocket park for residents featured seating, grill, mailbox and pet station and served as a gathering place. 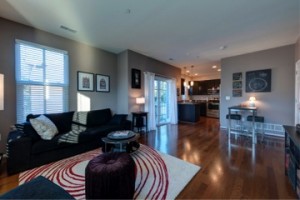 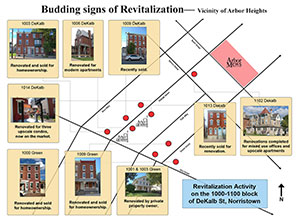 The success of Arbor Heights has spawned new investment by a number of neighboring property owners and is starting to turn around the neighborhood.

Historically, Norristown was once the bustling center of business and industry and DeKalb Street housed magnificent Victorian mansions. In the 1960s, new highway arteries and the blossoming nearby King of Prussia mall started Norristown’s economic downward spiral. The DeKalb street neighborhood, just a few blocks from the Montgomery County courthouse, became dominated by substandard rental housing, concentrations of poverty, and drug and prostitution activity.
In an attempt to stem this decline and catalyze a revitalization of one of the worst perceived neighborhoods, the Municipality of Norristown secured a grant from Montgomery County and the Commonwealth of Pennsylvania in the late 2000s to purchase and demolish two of the worst properties in the 1000 block of DeKalb Street. They searched for developer who could redevelop the site with creatively designed, affordable housing for homeownership. No one knew for sure whether homes could be sold in this blighted, transitional location.

Sarah Peck and her company, Progressive New Homes, agreed to demolish and redevelop the two-lot property into affordable new townhomes for homeownership. She created a product type of stacked townhomes made to resemble the historic mansions in the neighborhood. Two buildings of six dwellings each flanked an existing 100 year old dwelling and were designed to integrate into the street scape seamlessly. Surface parking for the residents was provided at the rear.

The architectural design emulated the existing historic architecture in the neighborhood, utilizing extensive brick, gables and front porches. Designing exterior architecture to echo the surrounding Victorian-era vernacular at a reasonable cost was a process that took months. Making sure that the new four-story buildings with their 9’ high interior ceilings did not overwhelm their three story neighbors was a particular challenge met by tucking living space under mansard roofs.

What Progressive found was that, despite the reputation of the neighborhood, many first-time homebuyers wanted an urban lifestyle, with the ability to walk to mass transit and retail and convenient access to major commuting arteries set in a neighborhood with unique architectural character. The surrounding shops, parks and services, bus service at the site, regional rail and high speed line are within .4 and .7 miles from the site, respectively.

The creative design of the two and three bedroom townhomes with tall ceilings and open flowing floorplans allowed for flexible living in smaller square footages of 1150 to 1500 s.f. Every home had private outdoor living space either via a front porch or a balcony and an inviting pocket park with seating, grill, pet station and mail box provided a sense of place for the residents. All 12 homes were sold within 9 months, and the community was sold out at the time of completion in July 2012.

Attractive Mortgage Financing Was Key to the Sale

While public funds lowered the price of the homes to an affordable $135,000 average, ultimately the key to this project’s success was its mortgage financing, which made the American dream of homeownership available to people who could not otherwise obtain it. Special mortgage financing offered by National Penn and Susquehanna Banks made it possible to waive normally required private mortgage insurance thereby reducing the monthly payment by about $150 compared with FHA financing; as a result the total mortgage payment was comparable to rent. And buyers who qualified for the Montgomery County First Time Homeowner Program (earning the County median income or less) needed only as little as $3,900 of their own money for their down payment with the rest of the down payment and all closing costs covered by a cash grant. Each sale involved extensive counseling to walk the buyer though each step of the purchase and mortgage process, including helping them rectify credit issues and save the required cash down payment. Renting is strictly prohibited to ensure that only homeowners and not investors purchased the units.

The monthly payment includes professional management by the Arbor Heights homeowners association. The attractive upkeep of the project well past the sale and the presence of twelve committed homeowners with a vested stake in the neighborhood has resulted in an impressive number of properties being upgraded and improved since the Arbor Heights investment.